Are you constantly tired, no matter how well you sleep? Are you suffering from weight gain, depression, hair loss, constipation or even brain fog? If you’ve seen your family doctor for blood work but everything appears to be normal, are you left wondering what to do now?

You are not alone. These are common symptoms frequently caused by a thyroid disorder or a thyroid imbalance. Thyroid conditions most commonly affect at least one in eight women (and to a lesser extent men) at some point in their lives. Unfortunately, more than half of these patients are totally unaware of the condition until disease eventually sets in. Let your intuition guide you to a doctor who is experienced in identifying, screening and restoring thyroid back to health.

A poorly functioning thyroid gland is referred to as hypothyroidism. This condition can be especially prevalent in women during life transitions such as pregnancy, after childbirth or during menopause, but can occur in men too with chronic stress or environmental pollutants exposure.

The thyroid gland is the master of our metabolism for the entire body, and so the early signs and symptoms of a hypothyroid condition are diverse and impact every cell of the body. The most common symptoms that I see in my practice are depression, fatigue, unexplained weight gain, constipation, increased sensitivity to the cold, and hair loss or dry, brittle hair. Please note, it is common to have symptoms for years before the TSH test becomes abnormal!

Hypothyroidism also greatly affects the female reproductive system. So if you are planning to conceive, it is very important to screen your thyroid function, as this demand doubles during your first trimester of pregnancy.

What and Where is the Thyroid Gland?

Your thyroid gland is a butterfly-shaped organ in the front of your neck. The thyroid plays an important role in your body’s energy and metabolism. The thyroid gland takes up trace minerals, such as iodine, selenium and tyrosine, and uses these to make thyroid hormones triiodothyronine (T3) and thyroxine (T4). These hormones circulate through the liver, brain and several other organs in the body as part of the endocrine system. If the thyroid is not functioning properly, you can develop health problems.

If you have the following health concerns – It could be your Thyroid:

The adrenal glands take the leading role when it comes to managing stress through the production of cortisol. Research shows that adrenal fatigue has an impact on thyroid function. Even at mild a degree of deficiency, adrenal fatigue can negatively affect thyroid hormone conversion, utilization, and production. For example, high stress can cause too much cortisol in the circulation which promotes inflammation around the thyroid, and this reduces thyroid receptor responsivity.  Therefore, when treating thyroid issues it’s important to address the adrenals, this connection and to care for them both effectively.

90% of cases of hypothyroidism are due to an autoimmune attack on the thyroid gland by either thyroperoxidase antibodies (TPOAb) or by thyroglobulin antibodies (TgAb), a condition called Hashimoto’s thyroiditis. What this means is that the body creates immune cells that attack the gland so that function declines over time. This condition can be triggered by gluten in gluten-sensitive individuals. Similarly, in these people, gluten avoidance for at least 3 months may help lower antibody levels to a normal range.

In some cases, the conversion of T4 into T3 doesn’t function properly due an enzyme issue or otherwise. Test results will show normal levels of TSH and T4 but severely low levels of T3. Commonly, in these cases, people are often told by their doctors that their thyroid function is “normal” even though they do not feel normal! This is also why some people who are medicated with Levothyroxine or Synthroid (T4) may feel like their medication is ineffective.

Thyroid hormone resistance can be thought of in the same way as insulin resistance is in diabetics. In this condition, the body’s cells are unresponsive to thyroid hormones. In these individuals, T3 and T4 levels can be normal but TSH levels are elevated.

For proper function and the creation of thyroid hormones, the thyroid gland requires the trace minerals iodine, selenium and zinc as well as an amino acid, thyroxine. Deficiency in any of these nutrients, can create symptoms of hypothyroidism. Iodine is found in iodized salt and sea vegetables (such as nori and dulse flakes). I have come to find that iodine deficiency is more prevalent than previous given credit for (a 24 Hour Urine Iodine Challenge Test can determine this). The trace mineral Selenium is abundantly found in Oysters and Brazil nuts, and Zinc is rich in pumpkin seeds and beef. Thyroxine, is the amino acid building block of thyroid hormones and can be found in most sources of protein.

The thyroid hormone and the heavy metal mercury have strikingly similar biochemistry. If an individual has ever had mercury amalgams in their mouth (even if they have now been long removed), both the fact of having had them and likely having had them removed without the proper biological dentistry, the long term exposure of this metal wreaks havoc on the thyroid gland. Sometimes it is prudent to screen for heavy metal toxicity and high levels of mercury that may be causing thyroid suppression. Chelation Therapy for removal of mercury from deep tissue store is one way to treat the underlying hypothyroid condition.

In rare cases, disorders of the pituitary gland or hypothalamus in the brain may be an underlying cause for central Hypothyroidism (AKA secondary or tertiary hypothyroidism). There are usually other concerning symptoms (beyond the list seen on this page) that would warrant imaging and more advanced hospital testing.

The thyroid gland controls the metabolic rate of every single cell in the body and maintains body temperature. Without enough thyroid hormone, our body slows down. We feel tired and lethargic, gain weight, experience constipation, feel cold, and are prone to depression. The four main thyroid markers we screen for in our office include TSH, free T4, free T3, and Anti-TPO. Sometimes we can include a reverse T3 if necessary.

Ensuring that one has optimal thyroid hormone levels is critical to feeling well. There are many natural treatments, from desiccated thyroid to Wilson’s Temperature Syndrome & Protocol, to herbal-based treatments and lifestyle practices. Read more about Thyroid Health 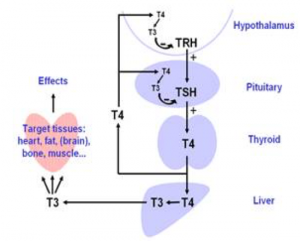 To properly treat hypothyroidism, you must know all your T’s. Thyroid Stimulating Hormone (TSH) is secreted from the pituitary gland in the brain. Its primary function is to tell the thyroid gland to secrete additional hormones, T3 and T4. When the levels of the active hormones (T3 & T4) drop, or the gland stops responding adequately, TSH levels go up as the body tries harder to stimulate the thyroid. This is why hypothyroidism is characterized by high levels of TSH.

Thyroxine is the thyroid “storage” hormone. T4 is the most abundant hormone that is produced by the thyroid gland. T4 is made from the amino acid tyrosine combined with 4 atoms of iodine. Selenium and zinc are also used during the chemical reaction. Deficiencies in any of these four nutrients will lower the output of T4 and impair thyroid function.

Triodothyronine, or T3, is the thyroid “energy” hormone.” For the body to use T4, it must first convert it to the active hormone T3, giving energy to every cell in the body.

The problem with T4 is that it is a very weak hormone or otherwise, “inactive”. So if the majority of T4 is not easily converted into T3 in sufficient amounts for the body, low levels of T3 will result in symptoms of hypothyroidism.

Reveres T3 (rT3) is a critical hormone acting as the body’s “emergency brake.”

Reverse T3, is naturally made in small amounts by the body from T4. However, when the body encounters acute stress (illness or starvation) in order to conserve energy, the body will start converting more of the available T4 into reverse T3. This causes T3 (our energy hormone) levels to plummet. Not only will T3 levels start to fall, but the reverse T3 will bind to cell receptors and prevent the little T3 you do have from fueling all the cells in your body.

There are multiple antibodies that may implicate healthy thyroid function including TPOAb (Thyroid Peroxidase Antibody), TGAb (Thyroglobulin Antibody) and TSI (Thyroid-stimulating Immunoglobulins). Elevated levels in these areas may indicate an autoimmune disorder such as Hashimoto’s or Graves’ Disease that could otherwise go unnoticed. In many Hashimoto’s cases, TSH, T4, and T3 remain within “normal” ranges.

If you have concerns about the state of your thyroid health, experience any number of symptoms discussed here or are trying to start a family, consider a Comprehensive Thyroid Panel. Sure, you have most likely had your TSH tested and perhaps landed within the normal range between 0.30 and 5.0 mU/L. That would be fine… if you felt fine!

However, proper thyroid function is dependent on optimal levels of multiple hormones, not just TSH. The optimal range of a healthy TSH is really between 1 and 2 mU/L and you should feel great.

If I suspect an individual to have hypothyroidism or early stages called “subclinical hypothyroidism”, I will order a Comprehensive Thyroid Panel (TSH, freeT4, freeT3 and TPOAb). Each individual and their constellation of symptoms along with history will help determine if any other testing should be considered (further thyroid markers of rT3 and TgAb, Adrenal Stress Index Test, 24-hour Iodine Challenge Test, 25-OH Vitamin D Screening, Heavy Metal Testing, etc).

Your Involvement is Key

After our initial visit and review of health concerns and tests results, coupled with an in-office thyroid exam and a basal metabolic read, we create a treatment plan together. There are many different ways to treat an individual with low thyroid function. Treatments can range from correcting nutritional deficiencies to botanical support to thyroid hormone replacement. Treatment with any thyroid hormone medication, or otherwise, requires careful monitoring and a partnership between doctor and patient. So it’s important to stay in touch with me and let me know how you’re feeling. A few monthly follow-up visits and retesting should get you back to feeling better, again! 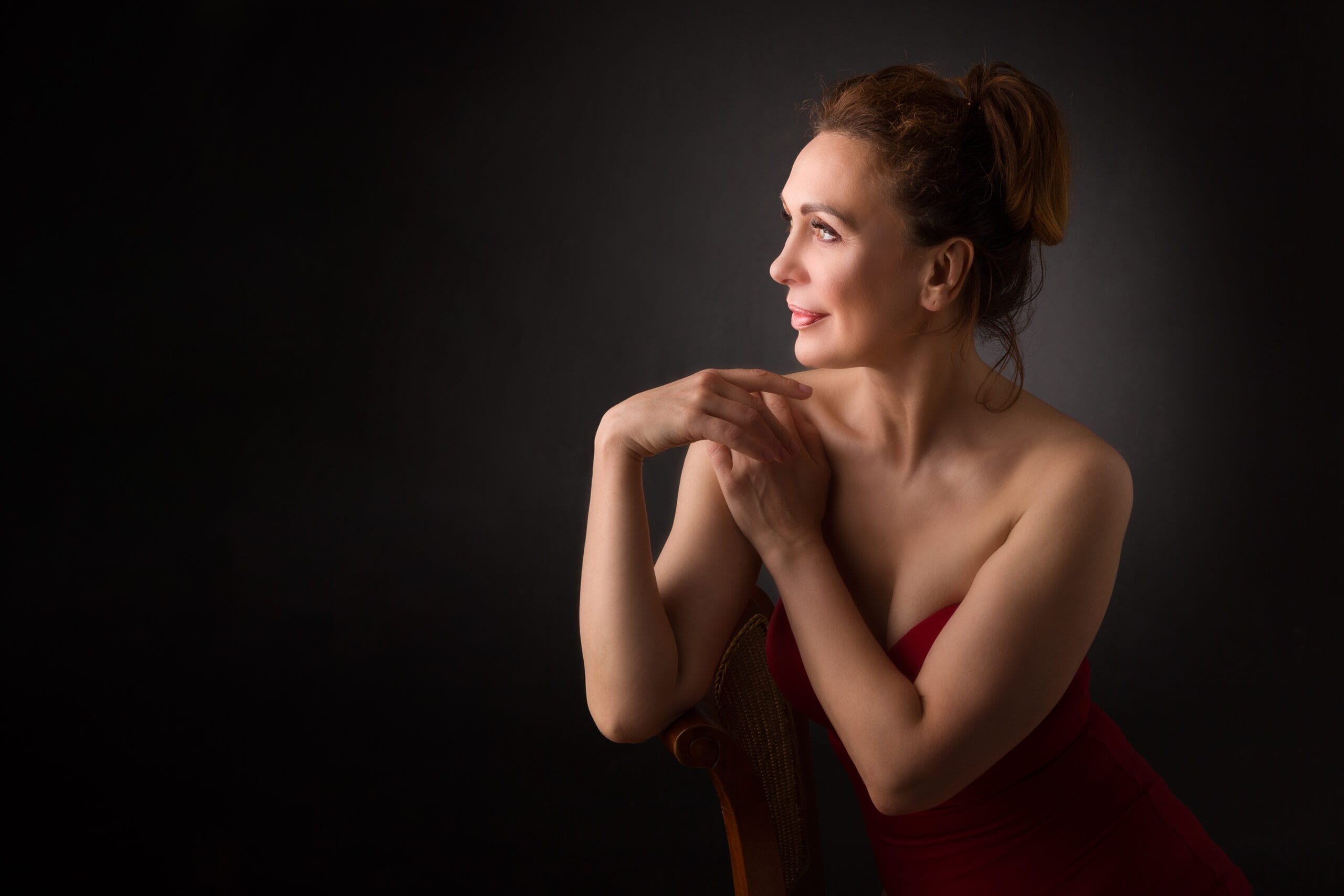